A Case Against Chassis Switching

If you have done any work in enterprise networks, you are likely familiar with the idea of a chassis switch. They have been the de facto standard for campus and data center cores and the standard top tier in a three-tier architecture for quite some time, with the venerable and perennial Cisco 6500 having a role in just about every network that I’ve ever worked on. They’re big and expensive, but they’re also resilient and bulletproof. (I mean this in the figurative and literal sense. I doubt you can get a bullet through most chassis switches cleanly.) That being said, there are some downsides to buying chassis switches that don’t often get discussed. In this post, I’m going to make a case against chassis switching. Not because chassis switching is inherently bad, but because I find that a lot of enterprises just default to the chassis as a core because that’s what they’re used to. To do this I’m going to look at some of the key benefits touted by chassis switch vendors and discussing how alternative architectures can provide these features, potentially in a more effective way.

One of the key selling features of chassis switching is high availability. Within a chassis, every component should be deployed in N+1 redundancy. This means you don’t just buy one fancy and expensive supervisor, you buy two. If you’re really serious, you buy two chassis, because the chassis itself is an unlikely, but potential, single point of failure. The reality is that most chassis switches live up to the hype here. I’ve seen many chassis boxes that have been online for entirely too long without a reboot (patching apparently is overrated). The problem here isn’t a reliability question, but rather a blast area question. What do I mean by blast area? It’s the number of devices that are impacted if the switch has an issue. Chassis boxes tend to be densely populated with many devices either directly connected or dependent upon the operation of that physical device.

What happens when something goes wrong? All hardware eventually fails, so what’s the impact of a big centralized switch completely failing? Or more importantly, what’s the impact if it’s misbehaving, but hasn’t failed completely? (Gray-outs are the worst.) Your blast radius is significant and usually comprises most or all of the environment behind that switch. Redundancy is great, but it usually assumes total failure. Things don’t always fail that cleanly.

So, what’s the alternative? We can learn vicariously from our friends in Server Infrastructure groups and deploy distributed systems instead of highly centralized ones. Leaf-spine, a derivative of Clos networks, provides a mechanism for creating a distributed switching fabric that allows for up to half of the switching devices in the network to be offline with the only impact to the network being reduced redundancy and throughput. I don’t have the ability to dive into the details on leaf-spine architectures in this post, but you can check out this Packet Pushers Podcast if you would like a deeper understanding of how they work. A distributed architecture gives you the same level of high availability found in chassis switches but with a much more manageable scalability curve. See that section below for more details on scalability.

Complexity can be measured in many ways. There’s management complexity, technical complexity, operational complexity, etc. Fundamentally though, complexity is increased with the introduction and addition of interaction surfaces. Most networking technologies are relatively simple when operated in a bubble (some exceptions do apply) but real complexity starts showing up when those technologies are intermixed and running on top of each other. There are unintended consequences to your routing architecture when your spanning-tree architecture doesn’t act in a coordinated way, for example. This is one of the reasons why systems design has favored virtualization, and now micro-services, over large boxes that run many services. Operation and troubleshooting become far more complex when many things are being done on one system.

Networking is no different. Chassis switches are complicated. There are lots of moving pieces and things that need to go right, all residing under a single control plane. The ability to manage many devices under one management plane may feel like reducing complexity, but the reality is that it’s just an exchange of one type of complexity for another. Generally speaking it’s easier to troubleshoot a single purpose device than a multi-purpose device, but operationally it’s easier to manage one or two devices rather than tens or hundreds of devices.

You may not know this, but most chassis switches rely on Clos networking techniques for scalability within the chassis. Therefore, it isn’t a stretch to consider moving that same methodology out of the box and into a distributed switching fabric. With the combination of high speed backplanes/fabrics and multiple line card slots, chassis switches do have a fair amount of flexibility. The challenge is that you have to buy a large enough switch to handle anticipated and unanticipated growth over the life of the switch. For some companies, the life of a chassis switch can be expected to be upwards of 7-10 years. That’s quite a long time. You either need to be clairvoyant and understand your business needs half a decade into the future, or do what most people do: significantly oversize the initial purchase to help ensure that you don’t run out of capacity too quickly.

On the other hand, distributed switching fabrics grow with you. If you need more access ports, you add more leafs. If you need more fabric capacity, you add more spines. There’s also much greater flexibility to adjust to changing capacity trends in the industry. Over the past five years, we’ve been seeing the commoditization of 10Gb, 25Gb, 40Gb, and 100Gb links in the data center. Speeds of 400Gpbs are on the not-too-distant horizon, as well. In a chassis switch, you would have had to anticipate this dramatic upswing in individual link speed and purchase a switch that could handle it before the technologies became commonplace.

When talking about upgrading, there really are two types of upgrades that need to be addressed: hardware and software. We’re going to focus on software here, though, because we briefly addressed the hardware component above. Going back to our complexity discussion, the operation “under the hood” on chassis switches can often be quite complicated. With so many services so tightly packed into one control plane, upgrading can be a very complicated task. To handle this, switch vendors have created an abstraction for the processes and typically offer some form of “In Service Software Upgrade” automation. When it works, it feels miraculous. When it doesn’t, those are bad, bad days. I know few engineers who haven’t had ISSU burn them in one way or another. When everything in your environment is dependent upon one or two control planes always being operational, upgrading becomes a much riskier proposition.

Distributed architectures don’t have this challenge. Since services are distributed across many devices, losing any one device has little impact on the network. Also, since there is only loose coupling between devices in the fabric, not all devices have to be at the same software levels, like chassis switches do. This means you can upgrade a small section of your fabric and test the waters for a bit. If it doesn’t work well, roll it back. If it does, distribute the upgrade across the fabric.

I want to reiterate that I’m not making the case that chassis switches shouldn’t ever be used. In fact, I could easily write another post pointing out all the challenges inherent in distributed switching fabrics. The point of the post is to hopefully get people thinking about the choices they have when planning, designing, and deploying the networks they run. No single architecture should be the “go-to” architecture. Rather, you should weigh the trade-offs and make the decision that makes the most sense. Some people need chassis switching. Some networks work better in distributed fabrics. You’ll never know which group you belong to unless you consider factors like those above and the things that matter most to you and your organization. 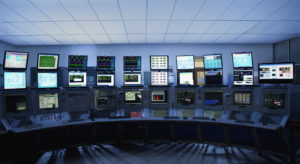 Network Monitoring Overload and How to Survive