(This is the third part of a series. You can find Part One here and Part Two here.)

It behooves me to remind you that there are many spoilers beyond this point. If you haven't seen the movie yet, and don't want to know what's coming, bookmark this page to enjoy later.

Having tools without understanding history or context is usually bad.

On the flipside of using tools creatively, which I will discuss in the next part of the series, is using tools without understanding their context or history.

There are two analogs for this in the movie. First is how Charles can't remember the Westchester Incident. He continues to operate under the assumption that Logan is tormenting him for some reason, forcing him to live in a toppled-over well, and then dragging him cross-country when they are discovered. In reality, they'd been hiding from the repercussions of Charles' psychic outburst. But lacking that knowledge, Charles is ineffectual in helping their cause.

The second example is "X24,” an adult clone of Logan and something of a mindless killing machine. X24 is Logan without context, without history, without a frame of reference. And therefore, he is without remorse.

Both of these cases exemplify the harm that can come when a tool is operated by a user who doesn't fully understand why the tool exists or everything it is designed to do. It is nmap in the hands of a script kiddy.

As "experienced" IT professionals (that's code for "old farts"), one of our key goals should be sharing history and context with the younger set. As I wrote in "Respect Your Elders", everything in IT has a reason and a history. Forgetting that history can not only make you less effective, it can be downright dangerous. But newcomers to our field aren't going to learn that history from books. They're going to learn it from us if we are open and willing to share.

Lynchpin team members become force-multipliers, even if their specific contribution wasn't the most impactful.

In the movie, Logan shows up at a final battle. He doesn't defeat everyone and technically all the kids should have been able to hold their own. But when he appeared, it galvanized them into working together.

A little earlier I mentioned that the mutant kids are able to hold their own against an army of reavers, robotically enhanced mercenaries intent on capturing and/or killing the children before they reach the Canadian border.

I should have mentioned that they are just barely holding their own. Before long, most are captured. It is only due to the timely arrival of Logan that they are able to regain the upper hand. And even then, Logan is the one who has to take on X24, their most powerful adversary.

Granted, it is Laura who ultimately ends the conflict with X24. Granted it is the kids who disarm, disable, or kill the bulk of the soldiers.

But Logan's appearance changes the tide of the battle. Before he arrives, the kids are being picked off one by one. The reavers control the situation, they understand each kid, and are able to neutralize their abilities with precision. After Logan appears on the scene, the reavers are fighting on two fronts and it disrupts their efforts, causes them to make careless mistakes, and ultimately costs them the fight.

In this moment, Logan is known as a "force multiplier," a tool, technique, or individual who dramatically increases the efficacy of the team. In effect, a force multiplier makes a group work as if they have more members, or have members with a greater range of skills, than they actually possess. While the concept is most commonly understood within military contexts, the fact is that many areas of work benefit from the presence of force multipliers.

It's okay to lie as long as you're telling the truth.

There are times in your IT career when you're going to need to lie. Not a little white "because the birthday cake is in the kitchen and we're not ready for you to come in yet" lie. Not a bending of the truth. I’m talking full-on, bald-faced lie.

You're going to get the email instructing you to disable someone's account at 2:00 p.m. because they're being let go. And then you're going to see that person in the hall and exchange pleasantries.

A co-worker will confide to you that they just got an amazing job offer, but they're not planning on giving notice for another two weeks. After that, you're going to be in a meeting with management offering staffing projections for the coming quarter, and you are going to feign acceptance that your co-worker is part of that equation.

Going back to the dinner scene on the farm with the Munroe family, the exchange about the school goes something like this:

Logan: “Careful, you're speaking to a man who ran a school… for a lot of years.”

Charles: “Well, that's correct. It was a… it was a kind of special needs school.”

Charles: (indicating Logan) “He was there, too.”

Logan: “Yeah, I was in it, too. I got expelled out three times.”

Charles: “I wish I could say that you were a good pupil, but the words would choke me.”

IT pros have access to so many systems and sources of insight that our non-IT co-workers can’t "enjoy." Therefore, we must endeavor to maintain the emotional truth of each situation, even when we have to mask the details.

But that isn't all I learned! Stay tuned for future installments of this series. And until then, Excelsior!

Is your IT team managing incidents but not documenting and tracking root cause? Register for our May 25 #ITSM webca… t.co/wPc7PQacbp 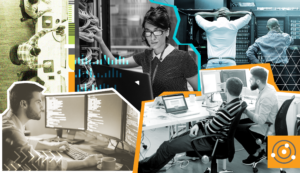