The Hybrid APM You Need and Deserve 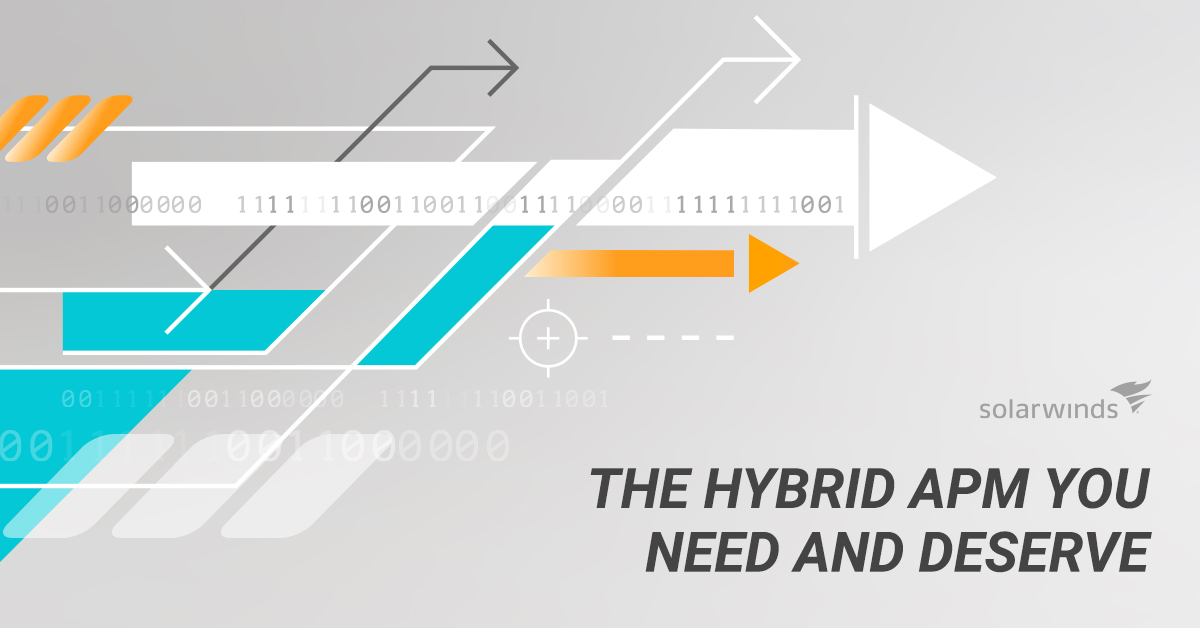 Commercial off-the-shelf (COTS) applications, Software-as-a-Service (SaaS) hosted applications, and custom apps: Historically, application performance management (APM) covered only one or two of those three things. The traditional APM only applied to custom applications because it required instrumentation of the application during its development. COTS and SaaS applications weren’t instrumented for the end-user customer as there was ultimately no point. Even if the commercial software package was poorly written, there was nothing a customer of could do about it (they can’t fix the code); so why bother? Now, even legacy or traditional COTS/SaaS and APM have evolved. Even the compiled code and services delivered by commercial vendors can be monitored from the end-user or company perspective—especially in the most important terms—how is it performing for the actual user? However, in a modern, digitally transformed organization, you really do need a unified solution to manage uptime and performance across all three. So, how is it done?

What Is APM in the World Today?

It’s often been said, time is money. In terms of IT resources and the wider world of the enterprise, so is application performance. Customers accessing the applications critical to their business requirements need flawless connectivity and performance, and if you can’t provide it, they’ll go elsewhere. APM provides IT with the means to monitor and optimize applications performance, ensuring they meet set performance standards and identify the issues inhibiting optimal performance. To that end, premiere APM solutions present IT teams with the data necessary to identify and correct performance lags before the end user can be affected. APM is the reporter who tells IT not only when and where application performance has issues but also why the problem happened in the first place. This leads to quick response and resolution times, maintaining an expected level of service. It sounds terrific, but APM’s traditional domain has become a restrictive silo, preventing IT and management systems from addressing the evolving scope of customer expectations for application use.

What Are You Missing in App Monitoring?

As previously mentioned, APM typically monitors one or two application architectures in the IT environment—but not all three. For instance, a SaaS solution performing APM functions can monitor infrastructure and custom apps deployed on-premises. For that matter, a server and application management (SAM) solution can monitor COTS or SaaS apps deployed in the public cloud, or on-premises. But attempting to patchwork numerous disparate tools together Frankenstein-style in the hopes of covering the entire application landscape is hopelessly complicated and almost certainly will leave gaps. And it’s not only the scope of the playing field but also the nature of the players. While apps have escaped the confines of on-premises and are now firmly rooted in the complex infrastructures of distributed data and cloud services, they’re also no longer the exclusive property of any one area of IT. If an application is found to be performing sub-optimally, it’s insufficient to leave it to operations to troubleshoot or to lay full responsibility on development. Putting these teams together across the entire app monitoring process and the entire end-to-end app stack could prevent bottlenecks and enhance feature adoption and performance. However, before this can happen, two assumptions must first be confronted.

It’s generally believed there’s a significant need to develop skills among IT professionals due to the perceived complexity of APM tools and practices. According to SolarWinds® vice president of products, application management, Jim Hansen: The Cloud Confessions results show that while APM has finally hit mainstream, it’s largely misunderstood and therefore underutilized. This isn’t surprising considering APM has typically been siloed across DevOps and Operations teams without a holistic view of the application code, supporting infrastructure, and end-user experience. The survey published in the Cloud Confessions report illustrates the concern for the lack of APM training or skills expressed by: Overall, 57% of tech pros believed the lack of training/skills was a significant inhibitor to deploying a comprehensive APM solution across the enterprise. Yet, APM doesn’t have to be bafflingly difficult. Instead of confronting the problem as one of education, make the tools more usable—just like the apps used by consumers everywhere, all day. By replacing highly complex APM with a more accessible experience, tech pros can leverage their existing knowledge to resolve app performance issues, rather than struggle with the APM itself.

The currently offered APM solutions are far too cost-prohibitive. A survey published in the Cloud Confessions report showed this was the opinion of: Overall, 32% of tech pros believed expense was a key challenge in deploying a comprehensive APM and infrastructure performance solution. Believing these assumptions to be “truths” stops many organizations from even considering, let alone implementing, a program for app monitoring across the entire application spectrum. However, adopting a robust APM system will ultimately result in cost savings by preventing expensive manual troubleshooting of ailing apps.

The APM beliefs mentioned earlier aren’t merely challenges to adoption; they deny the reality of the modern application monitoring landscape. While nearly 90% of tech pros use some combination of APM tools in a small subset of their IT application environments, two-fifths of this population continues to face challenges because they’re unaware of the full nature of the APM solutions currently on the market. If information about those tools were more widely disseminated, the proverbial scales would fall away, revealing not only the true nature of the distributed application domain but also how such a realm could be successfully monitored from COTS to SaaS to custom apps. No two IT environments are identical, so it’s incumbent upon tech pros to be aware of which combination of APM elements should be applied. Be sure you have an accurate inventory of applications. Know the critical technologies you’re measuring and why they’re important. Survey the full spectrum of APM tools, and select those specifically meeting your business needs. Speaking to the necessity of education and paraphrasing another film dialogue, “If you build it, skills will come.”

The New Reality for the Hybrid APM Adopter

Ralph Waldo Emerson said, “You are what you think all day long.” Applied to IT and the business environment, the reality of APM is what you believe it is. This is not to deny the necessary tools must exist, but in all likelihood, they already do. Adopting a hybrid APM solution is a matter of first believing it’s possible by realizing the associated disruptive truths—comprehensive APM solutions don’t have to be complex (requiring skills/training) and they don’t have to be so expensive they cannot be adopted pervasively. Then, with eyes wide open, assessing your current and future needs against the most applicable APM monitoring platforms. Your landscape could be composed of on-premises, hybrid, or pure cloud, but the requirement for accurate end-to-end application monitoring is the same. Traditionally, development wants change and operations wants stability; but is it too much for businesses to ask for both? After all, this is the new reality.
Share: